Peloton Interactive‘s shares swung widely Tuesday after the fitness company’s first earnings release since its IPO showed that revenue more than doubled from the last year.

The stock initially jumped by about 6% in premarket trading before sliding about 4% after the opening bell.

“The stock going backwards is a bit of a head scratcher, I’ve got to be totally honest with you,” Peloton CEO John Foley said in an interview with CNBC’s “Squawk on the Street.”

Peloton also doubled its connected fitness subscribers, defined as a Peloton user with a paid subscription. The company boasted more than 560,000 such members at the end of the first fiscal quarter, up from almost 277,000 a year ago.

For the full year, Peloton expects revenue of $1.45 billion to $1.5 billion and projects to grow connected fitness subscribers to 885,000 to 895,000. Yet it could take time for the company to turn a profit, Peloton CEO John Foley said Tuesday on an earnings call.

“I believe if we pulled back on growth, we could be profitable tomorrow,” Foley said. But that is not what the board and the leadership at Peloton believes we should do. We believe the global opportunity is so big that we’re on the right balance of investing for future growth.

The company, which sells computer-connected fitness equipment and subscriptions to stream its workout classes, made its public debut in September. Wall Street is growing increasingly skeptical of money-losing start-ups, with names like SmileDirectClub, Uber and Pinterest among those struggling in the public market this year.

Peloton’s stock is trading around $24, below its IPO price of $29. Peloton had the second-worst debut of a so-called unicorn, or a company with an offering size larger than $1 billion, this year. 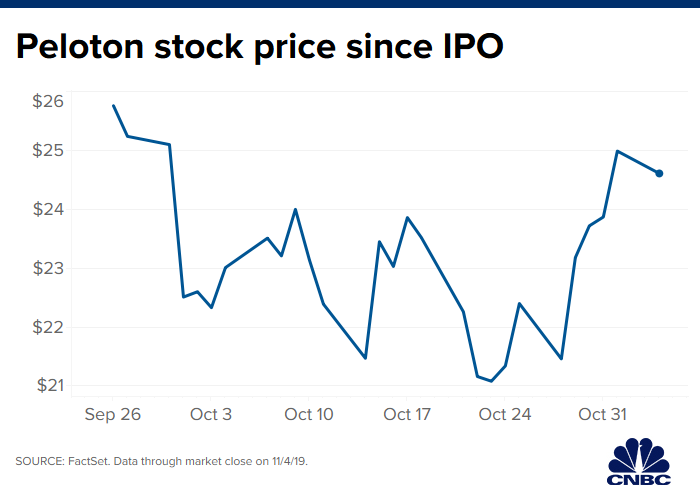 Foley co-founded Peloton in 2012. The company sells exercise bikes and treadmills for about $2,000 and $4,000, respectively. Members pay $39 a month to stream classes on the screens attached to the equipment. Peloton also sells a digital membership that for $19.49 gives people access to classes on its phone app.

Peloton sells most of its products in the U.S., though it introduced them to the U.K. and Canada last year. Peloton will enter Germany on Nov. 20, the company said Tuesday in its earnings release.

Disclosure: CNBC parent Comcast-NBCUniversal is an investor in Peloton.